I recently received a message via my Facebook Page regarding some of the ero guro nansensu-themed posts on this blog. I felt that the questions raised were so pertinent to my ongoing discussion on the subject, that I should fashion a blog post around them. Many thanks to Christo KJ for the original message.

Q: Hi, I hope you don’t mind that I’m contacting you like this. I’ve been studying film and television science for the past five years here in Norway. I just read your posts about ero guro nansensu and I found it very interesting. But I do have some questions about the definition of what an ero guro film is.

Both Italian Neorealism and German Expressionism have very specific rules for what type of movies that are and are not part those movements. Ero guro is of course not a film movement like Neorealism. But are there any similar rules when it comes to ero guro in film, which explains specifically what is and what is not ero guro?

A: That’s an excellent question. The short answer is: no, and yes.

No, in that ero guro nansensu emerged as a mass-media driven cultural phenomenon at a time when the film industry in Japan was still in its early years** and, as you so rightly pointed out, was not a film movement like German Expressionism — which, incidentally, emerged at roughly same time in Germany as ero guro flourished in Japan.

Ero Guro could be best described as a zeitgeist — or “spirit of the times” — that organically developed during the interwar years in Japan. It’s main devotees were the urban youth, artists, and other bohemians, although its influence was also felt outside of the cosmopolitan city centres. It was not a movement created by a group of artists, nor was it guided by a manifesto of any kind that outlined its common goals or philosophy.

Academics like Miriam Silverberg and Jim Reichert have proposed that ero guro formed a kind of collective reaction against the ultraconservative morality touted by the fascists who were rising to power in 1920s-30s Japan. This interpretation of cultural history does seem to carry credibility, and I wrote about this in my previous blog entry.

With all that said, there are some motifs and themes that I would identify as being strongly indictative of ero-guro. These are:

Most of these motifs come directly from the writings of Edogawa Rampo, about whom I wrote in another blog entry. You simply cannot discuss ero-guro in any meaningful way without touching upon the work of Rampo.

Q: Are all pink films that contain torture or S&M ero guro?

A: I would argue no, though there does seem to be a lack of consensus on how best to apply the ero-guro label to films. In my opinion, the term ero-guro (sometimes shortened to simply guro) is thrown around too indiscriminately. Since Rampo and his literary contemporaries were so heavily influential in the shaping of ero-guro, I use their work as a gauge against which all work labeled ero-guro is measured. Whereas Teruo Ishii’s pinky violence film Horrors of Malformed Men is undoubtedly ero-guro — partly owing to the fact that it’s a very loose adaptation of at least five different Rampo stories — not all violent pinku-eiga can be categorized as ero-guro. In other words, even though sex, violence and gore are frequently elements found in ero-guro, their presence alone does not indicate a film that is ero-guro.

To confuse matters further, however, I recently stumbled upon this classification of ero-guro-nansensu in a book entitled Historical Dictionary of Japanese Cinema, written by Jasper Sharp:

“The term [ero-guro] resurfaced in the 1950s to describe the more macabre B-movie gangster, science fiction, and horror works by Shintoho, such as those directed by Ishii Teruo, as well as screen adaptations of writers like Rampo. From the 1980s onward, it has been most commonly used in connection with underground works featuring overt depictions of sex, violence, and grotesquerie…” — Sharp, pp. 60-61

Ultimately, it may come down to personal taste as to which version of ero-guro you prefer. I hold a greater affinity towards the artistry, complex plot twists and exaggerated theatricality of films such as Sion Sono’s Strange Circus (2005), versus the more straightforward softcore-meets-gore of Entrails of a Virgin (1986). Both films deliver on the sex, violence and gore, but Strange Circus does it with a lot more style and panache.

Q: Would you consider the movie Grotesque by Koji Shiraishi as ero guro?

A: I’m aware of that film, but have yet to view it.

Q: Would you consider some of Takashi Miike’s movies as ero guro, for example Ichi the killer, Gozu, Visitor Q?

A: Takashi Miike has created a couple of films that I would identify as being ero-guro, but not amongst the films you mention. There’s an excellent pan-Asian compilation DVD called Three…Extremes that came out in 2004 which featured a short film by Miike called Box. A dream-like, atmospheric story that’s uncharacteristically restrained for Miike, Box involves the story of twin girls who work with their father in a magic act. Their trick is to fold themselves into impossibly small boxes. There’s the hint of incest (deviant sexuality), bodies that do not conform to convention (the girls are contortionists), murderous revenge and blurred boundaries between the dreaming and waking world. It’s by far the most ero-guro flavoured film that Miike has done to date. You can get a taste of it here. 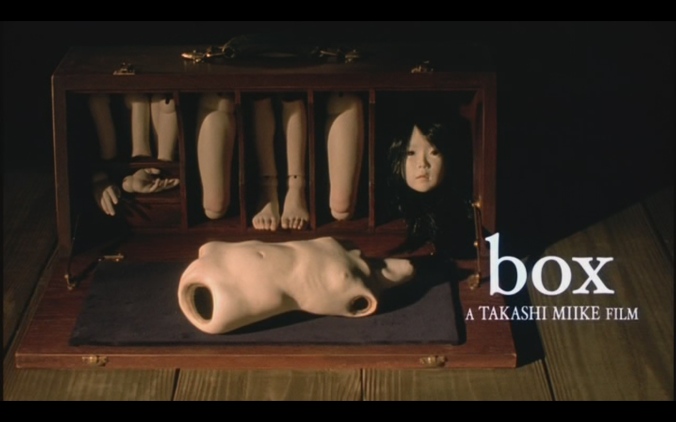 Q: Are there any non-Japanese films that you would consider as ero guro, like for example Pasolini’s  Salo 120 days of Sodom or A Serbian film?

Some ero-guro films that I would recommend:

**Interestingly enough, Japan was one of the first countries to develop a film industry, beginning in the latter years of the 19th-century.

2 thoughts on “Someone asked me some questions about ero-guro, and here’s what I answered.”