The dog days of Summer are now upon us, but don’t let those increased hours of daylight discourage our mutual reveling in the dark & macabre.  Summer is the perfect time of the year to relax, disengage your critical thought and wallow in the raunchy, gory, completely tasteless absurdity of horror & exploitation films. For the bookish crowd, there are “Summer Reading” lists offered annually by media sources such as Toronto Life and CBC Radio. Now, don’t get me wrong —  I do love to curl up with a good book whenever the opportunity presents itself. Film geek that I am, however, I derive greater enjoyment from seeking out and viewing obscure, bizarre and, um, not-exactly-high-brow films — such as the films I list below. If your taste in film is rather like mine, then track these films down as a “Summer Viewing” project. You probably won’t find these titles in your local Blockbuster video store, though. If you’re successful in locating any of these, then cue the DVD, pull the curtains, and embrace their insanity. Then tell me what you thought in the Comments section at the end of this post.

Valerie embraced by the 'Polecat' vampire-like creature, who's also the town's high priest and possibly her father (??!!) in "Valerie and her Week of Wonders" (1970).

1. Valerie and her Week of Wonders (Czech: Valerie a týden divů) is a 1970 film from the former Czechoslovakia, directed by Jaromil Jireš. This is the most “artful” of the films that appear on this list and, even though the print I viewed was of very poor quality, the stellar cinematography clearly stood out. The film is a dark, coming-of-age fairytale as only the Czechs could envision. The titular heroine, 13-year-old Valerie, grapples with her burgeoning sexuality, as well as the many priests, vampires, men and women who attempt to seduce and/or kill her. Fortunately for young Valerie, she possesses magical earrings which, when placed in her mouth, rescue her from impending death — which happens with great frequency throughout the film. Disjointed and surreal, you’ll hurt your brain if you try to make sense of the proceedings. Characters often change appearance and, as in the case of the ‘Polecat’, occupy shifting and ambiguous roles. Is he a priest? A vampire? Valerie’s father? A weasel? All of the above? Yes. Don’t worry about it, just enjoy the many beautiful images and the hazy, dreamlike pace of this film. 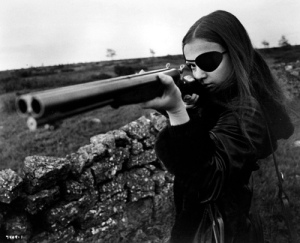 2. Thriller — A Cruel Picture (Swedish: Thriller – en grym film, also known as They Call Her One Eye, Hooker’s Revenge and simply Thriller) is a 1973 Swedish exploitation film. The film follows the typical Rape-Revenge formula: the heroine suffers tragedy and physical degradation until the latter half of the film, when she exacts bloody revenge on those who’ve abused her. (Read my earlier post on the Rape-Revenge film for my thoughts on this exploitation subgenre.) The teenage Frigga — who has been rendered mute by the childhood trauma of sexual abuse — is kidnapped by the local pimp and forced into both heroin addiction and prostitution. When she is initially non-compliant, Frigga has one of her eyes cut out with a scalpel in a brief but grisly scene that reputedly employed an actual cadaver as a body-double. From then on, she silently endures abuse from her clients while she saves up her portion of the financial transactions. She packs her Mondays (her one day-off work) with karate class, rifle-shooting and driving-really-super-fast class, as she secretly plots her revenge. Montage after long montage, she finally dons a black leather trenchcoat, matching eye-patch, and a sawed-off shotgun, and pays a slow-motion visit to each of her (soon to be former) clients.

The film was marketed as the first film ever to be completely banned in Sweden, although the one that actually was first was Victor Sjöström’s The Gardener from 1912. It has received a cult following and was one of the inspirations behind Quentin Tarantino’s Kill Bill, specifically the character of Elle Driver (Daryl Hannah). In Daniel Ekeroth’s book on Swedish exploitation movies, Swedish Sensationsfilms: A Clandestine History of Sex, Thrillers, and Kicker Cinema, it is revealed that the producers took out a huge life insurance policy on star Christina Lindberg, as real ammunition was used in the action sequences, and that she was asked to inject saline solution during the drug scenes. — from Wikipedia.

There's no joy in being dead, not even 'living death', as evidenced by the melancholic Catherine in Jean Rollin's "The Living Dead Girl" (1982). Oh, the existential angst of it all.

3. The Living Dead Girl (French: La Morte Vivante) is a 1982 campy classic from French fantastique director Jean Rollin. Reanimated by the spillage of a toxic waste goop on her corpse, the aristocratic Catherine discovers she has a new-found taste for human flesh. Like all of Rollin’s films, the aesthetics play a much more crucial role than the story or, indeed, the acting. His films are as gorgeous as they are completely ridiculous. The absurd plot devices — toxic goop dumped on (surprisingly well-preserved, two-year-old) corpse interred in family crypt — exist only to furnish Rollin with an excuse to create his signature erotic-grotesque imagery. Rollin’s The Living Dead Girl is splatter gore-meets-arthouse, served up with a little Jean-Paul Sartre on the side. The existentialist exchange that occurs between Catherine and her childhood friend Hélène is thoroughly hilarious:

Hélène: You were never dead. The dead don’t come back to life. You were put to sleep, drugged, driven mad or I don’t know what. I don’t understand. I never saw you dead, Catherine. They put an empty coffin in this crypt.

Catherine: No. I’m dead, Hélène. I know I am. Don’t you understand? I know I am!

Catherine and Hélène discuss the finer points of existence in "The Living Dead Girl."