Can I let you in on a secret? This hardcore horror fan is scared of ghosts — OK, more specifically, films that feature ghosts. I’ve watched zombie hordes feast on flesh, and vampires drink human blood. I’ve seen the minions of Satan perform gory midnight rituals, and serial killers dispatch their victims in creatively sadistic ways. None of these have frightened or unnerved me to the degree that a good, old-fashioned ghost story can. If anything can cause me to cower beneath the bed covers at night, it’s the suggestive power of a ghost story that relies on psychology rather than gore or cheap scare tactics to frighten the bejeezus outta you. Therein lies its true potency.

1. The Japanese have always had a knack for constructing effective tales of the supernatural. Ugetsu monogatari (dir. Kenji Mizoguchi, 1953) is a beautifully-shot, black-and-white masterwork from Japan’s “Golden Age” of cinema. This film is a  jidaigeki (period drama) set during the Edo period, and is ostensibly a morality play on the theme of personal responsibility. As is customary in many Asian ghost stories, the supernatural co-exists with the world of the living in a straightforward, matter-of-fact way. Ghosts can be the benevolent souls of the dearly departed who dwell on the earth to protect family members, or they are malevolent spirits bent on revenge. The ghosts in Ugetsu are more the former than the latter, although the Lady Wakasa has a definite sinister side to her. I would characterize this film as a tale of misfortune and poor-choices-with-tragic-consequences than as a ghost story whose raison d’être is to merely frighten.

The malevolent ghost-child Samara climbs out of the TV in the now-iconic conclusion to “The Ring” (2002).

2. While we’re on the topic of Japanese ghost stories, my next pick The Ring (2002) is the English-language remake of the Japanese film Ringu (1998). When a foreign-language film is remade into an English version, I almost invariably prefer the original film — in fact, I very seldom watch remakes of foreign-language films as I feel that much of the original context is lost in translation (ie. the [REC] films are enriched by their location in Spain, with everyone speaking Spanish, etc). Gore Verbinski’s The Ring is that rare exception where the remake is an improvement over the original. Verbinski maintains the visual aesthetics of the original, but torques up the fright factor. The remake also removes some of the problematic (for a Western audience) gender issues that are present in the original film.

3. Ti West is one of my favourite new directors working in the horror genre. He is the master of the slow-boil, and while the snail’s pace of his 2011 film The Innkeepers is definitely not for the thrill-a-minute horror fan, I truly believe that the slow pace works to amplify the creepy-as-hell finale. West gives us ample time to get to know his two main characters Claire and Luke, two employees — and amateur paranormal investigators — who work at a supposedly haunted New England hotel. I actually switched this movie off twice whilst viewing it. The first time, it was out of sheer boredom. It was 45-minutes into the film, and virtually nothing had happened other than some banal, somewhat-flirty banter between our two protagonists, and the occasional hotel guest complaining that they had no towels in their rooms. I decided to try again. The second time I switched it off, it was because things were finally happening, and the suspense had me too much on edge.  My advice: stick with it, because the ending is worth it. 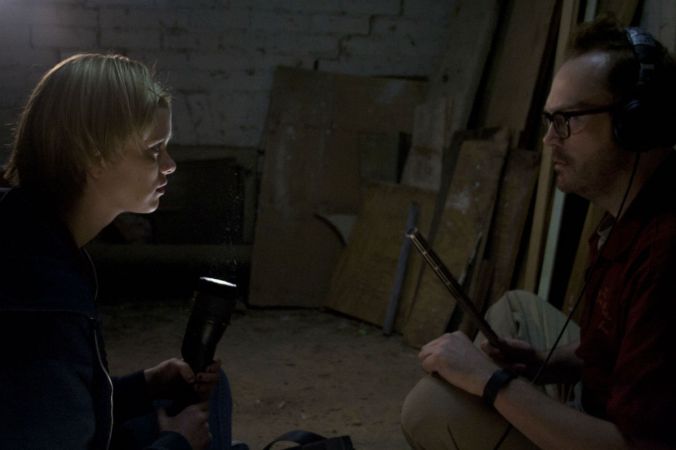 “I know, Luke. We should totally hang out in the dark, creepy basement of this haunted hotel.” Claire and Luke try to record the ghost of Madeline O’Malley in “The Innkeepers”. 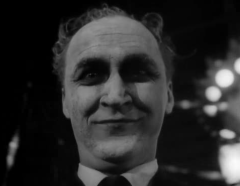 4. An overlooked gem from the early 1960’s, Carnival of Souls (1962) has received some well-deserved recognition from genre fans these past few years. An impressionistic, almost surreal black-and-white film that follows the lone survivor of a car accident who’s haunted by visions of a ghoulish man who stares silently at her, grinning. Did she survive the car accident, or is she truly dead and a ghost? That’s the question that torments poor Mary throughout Carnival of Souls, and while the story is somewhat threadbare, the visuals and atmosphere are superb.

5. I’ve already written about Robert Wise’s The Haunting (1963) in a previous post, but I felt it definitely needed to be on this list. Let’s all pretend that the abominable 1999 remake didn’t happen, shall we? This is such a beloved Gothic ghost story. Watch the clip below to see why:

Theodora: Is this another one of your crazy ideas?
Eleanor: I’m not crazy!
Theodora: Crazy as a loon! You really expect me to believe that you’re sane and the rest of the world is mad?
Eleanor: Well why not? The world is full of inconsistencies. Full of unnatural beings, nature’s mistakes they call you for instance!

The text above is dialogue from Robert Wise’s film The Haunting (1963) in which Dr. Markway, a researcher into paranormal activity, has assembled a group to investigate the reputed haunting of the gothic New England mansion Hill House. Amongst the group are the clairvoyant Theodora, a bold, outspoken woman who exudes worldly sophistication, and Eleanor, an awkward spinster who’s spent most of her adult life caring for her sick mother. In spite of their differences, Theodora befriends the mousy Eleanor, and there’s even the hint of romantic interest — however unlikely — emanating from Theodora. Director Robert Wise and screenwriter Nelson Gidding conceived of the Theodora character as lesbian, which would be one of the earliest appearances of a queer character in cinematic horror. Of course, the social climate of the early 1960’s meant that references to Theodora’s sexual orientation were all very codified and subtle, but Eleanor’s accusation of  “…unnatural beings…” and “nature’s mistakes…” allude not only to Theo’s preference in romantic partners, but they clearly establish homosexuality as an indication of deviance and ‘unnaturalness’.

As was discussed in my earlier post on gender & the slasher film, queerness and the fluidity of gender identity in horror fiction is frequently a sign of mental illness. The cross-dressing serial killer — Norman Bates, for instance — and the homicidal, lovesick lesbian from Aja’s Haute Tension are examples of blurred gender boundaries being symptomatic of mental instability. While the character of Theodora in Wise’s The Haunting is not portrayed as violent nor mentally ill, her lesbianism marks her as ‘unnatural’ as the haunted Hill House in which the drama unfolds. This notion is certainly ironic given that it is the socially-awkward Eleanor, and not Theodora, who stands out as “the one who doesn’t belong” within the group. 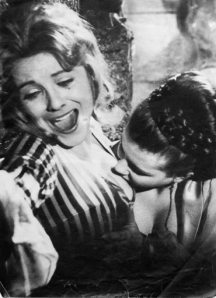 This takes us to the third most common female trope in horror fiction: the Lesbian, and specifically the Lesbian Vampire. Why vampire, you ask? Simple. This trope has its roots in Joseph Sheridan le Fanu’s novella Carmilla (1872) about the predatory love of a female vampire for a young woman. Le Fanu’s novella was influential not only on Bram Stoker’s Dracula — which it predated by 25 years — but serves to this day as the source chiefly consulted for the female vampire. (See my post on The Vampiress for more on this topic). The reason for the popularity of the Lesbian Vampire seems fairly straightforward: titillation, pure and simple. Wikipedia sums this up neatly:

This was a way to hint at or titillate with the taboo idea of lesbianism in a fantasy context outside the heavily censored realm of social realism (Weiss 1993). Also, the conventions of the vampire genre — specifically, the mind control exhibited in many such films — allow for a kind of forced seduction of presumably straight women or girls by lesbian vampires.

In the early 1970’s, Britian’s Hammer Studios created the much beloved Karnstein Trilogy, a series of lesbian vampire films very loosely based on Le Fanu’s novella: The Vampire Lovers (1970), Lust for a Vampire (1971) and Twins of Evil (1971). I’ve only seen the first film, which stars the iconic ‘Hammer Girl’ Ingrid Pitt and is quite giggle-worthy. File under ‘guilty pleasure.’

For the most part, the Lesbian Vampire is more softcore than horror, and bears little resemblance to the gender-bending serial killers mentioned earlier. What they do have in common, however, is the demarcation of Otherness — even the racy, breast-biting vampire of Twins of Evil is ultimately portrayed as ‘aberrant’ and ‘deviant.’

In Part IV of this series of posts, I’ll address the Rape-Revenge Girl.