Hello, my Darklings! It may be a relatively balmy afternoon in Toronto, but the warm weather’s not fooling Lady Lazarus.  It is undeniably mid-October, which means it’s that time of year to carefully craft a horror-themed list in anticipation/celebration of Hallowe’en.  While the tagline for this blog “musings on the macabre” indicates my year-round fascination with all things spooky and disturbing, come Hallowe’en, this fascination finds full expression in mainstream culture. In short, I can hoist my horror-freak flag up high.

This year, I decided to go with the theme of “scary movie/TV moments”, meaning those scenes that, for me, contain particularly potent images of horror. As always, this is a highly subjective list. Your list will likely vary. One curious thing I noticed when crafting my list is that all the scenes share a common element. Read on to discover what that would be.

1. Hospital hallway scene from Exorcist III: Legion (1990). William Peter Blatty’s novel Legion is the true sequel to The Exorcist, and not that ridiculous, let’s-cash-in-on-the-original Exorcist II that starred a somehow “re-possessed” Regan (with Linda Blair reprising her role) and a bunch of locusts. When I heard that Blatty himself would direct Exorcist III: Legion, I was actually hopeful that the movie wouldn’t suck. Well, it did. Except for this scene, which is a classic jump-scare moment, expertly done. I don’t want to spoil the moment if you haven’t seen this film, but I would like to point out how well the slow pacing, the static camera, and the everyday banality of the moments leading up to the jump-scare serve to underscore the horror.

2. There are two things that creep me out about the character of Bob from David Lynch’s cult TV series Twin Peaks. Firstly, it’s his appearance. He’s a bedraggled, denim-on-denim denizen of a very seedy underworld, with wild eyes and a maniacal grin. His long hair, toothy grin and feral nature casts him in the role of the Big Bad Wolf, only the world that he emerges from is not one of fairytales, but of nightmares. The second, even more chilling aspect of Bob is how he always just appears, seemingly out of nowhere. One moment, there you are sitting on the broadloom of your parent’s tastefully decorated, circa 1980’s suburban home — complete with floral arrangements and throw-cushions — and suddenly BAM! There he is, climbing over your Mom’s couch with that sinister grin, making his way directly towards you. Whatever his plans, you know it’s not going to end well. Much like the psycho-killer in the scene above from Exorcist III: Legion, it’s Bob’s sudden, inexplicable appearances that always freaked me out. 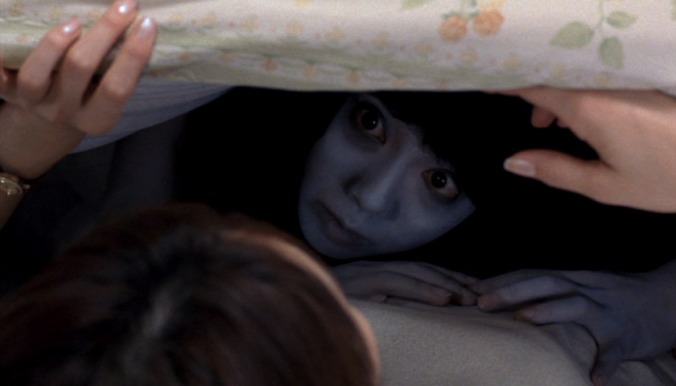 3. I first saw Ju-On (2002, dir.Takashi Shimizu) at the Toronto International Film Festival back in 2003, and it still remains one of my favourite J-horrors of that era. While I have to admit that the latter half of the film is mainly comprised of a relentless succession of jump-scares, Ju-On still offers up some great visuals, such as the image of the ghost-woman Kayako slooooooowly crawling down the stairs towards the horrified heroine Rika. The image that has always stuck with me, however, is the one depicted above — with Kayako suddenly materializing underneath the bed covers, and directly on top of her victim. Can you imagine lifting your bed sheets to see that face staring up at you? NO.

4. Yes, ok, The Exorcist (1973, dir.William Friedkin). I know it’s a given on any horror movie-related list, but there’s a really good reason why that would be. It’s just that good. I’ve already mentioned in a past post the freaky demon-face that haunted all our childhood dreams — if you happen to be of a similar vintage to me — but the image I’d like to address is the one with Father Karras’s mother suddenly appearing on Regan’s bed during her prolonged exorcism. Other than the fact that the scene cuts to this image so abruptly, eliciting a jump-scare moment out of the audience, it’s the sad, questioning expression on her face that I find so unnerving.“Why, Demi? Why?” Indeed.

So, that’s it. Have a safe and happy Hallowe’en, kids. I hope to, as long as nothing sinister suddenly appears around me.