OK, I admit it. It’s not even October, and I’m already planning out Halloween costumes for myself and my kids in eager anticipation of our favourite festive occasion. For the little ones, it’s all about spooky ‘make-believe’ and a prolonged sugar buzz. For the adults — those with and without children — it’s a culturally-acceptable opportunity to play masquerade and temporarily assume a different persona. And for those of us who revel in the macabre on a regular, year-round basis, it’s a chance to geek-out and make our ‘expert’ horror film recommendations for Halloween-themed movie nights.

Much like adults, children can vary widely in their tastes for, and tolerance of, scariness in films. Their reaction to such material can sometimes be unpredictable, but below I’ve listed a few spooky classics that should be age-appropriate for most children. 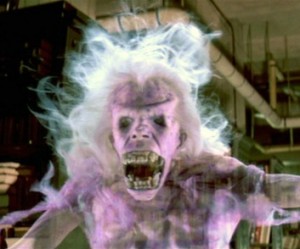 The Library Ghost (aka The Grey Lady) from "Ghostbusters" (1984). Could freak out very small kids, but a not-so-scary film for most.

3. Ghostbusters (1984). A couple of scenes might prove too frightening for very little ones, but on the whole a spooky-fun family film. Recommended for age 6+

4. Not too surprisingly, the gorgeously gothic creative efforts of Tim Burton features large on this list. Family-friendly Burton films include Beetlejuice (1988), and the animated feature-length films The Nightmare Before Christmas (1993) and The Corpse Bride (2005). I’ve shown the latter two films to my 4 and 6-year-old kids, and they reported that these were “a little too creepy” in parts. Use your own parental discretion, but I’d recommend these films for age 8+ 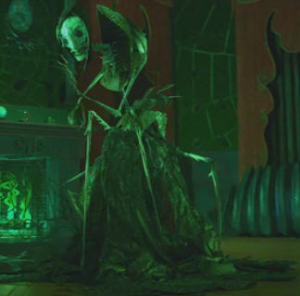 The alternate-reality "spider Mom" from Coraline (2009).

5. Coraline (2009) has a very similar look-and-feel to the aforementioned Tim Burton animated films, and shares with these a creepiness that’s probably more appropriate for the 8+ crowd. All the same, a visually-stunning masterpiece of stop-motion animation that’s worthwhile for adults as well as children.

Quite frankly, I can’t wait until my kids are old enough to accompany their mother through a viewing of The Exorcist or a George A. Romero zombie gore-feast. Perhaps when they are around the age of 10…?

My next post will offer up suggestions for some adult-sized scares.