Sex sells. So, evidently, does violence. When the two are paired together and offered up as a form of “extreme” entertainment, the results can be problematic. Throughout the horror genre, as well as within exploitation cinema, the naked bodies of young women are displayed, initially to arouse, and then to be victimized by violence. But why? Granted, there is a small segment of any population that are sexual sadists, and by which I mean truly pathological individuals and not your garden-variety, suburban married couple who dabble in spanking and other types of weekend sadomasochism. But this type of individual is not the norm, and is certainly not indicative of the fan base for horror & exploitation cinema. Most horror geeks — and I include myself in this grouping — are people who have a taste for that which is not typically found in mainstream, non-genre entertainment: the shocking, the trashy, the absurd and the downright nasty. These are also the mainstays of that close relative to horror, the exploitation film. Exploitation films of the 1970’s competed with each other over an ever-shrinking audience at drive-ins and grindhouse theatres, and this competition resulted in a kind of oneupmanship in terms of sex, violence and gore. Advertisements tantalized by promising the most shocking, the most sickening, and the most racy content available at a cinema.

The average consumer of horror and exploitation films in the 1970’s was young and male. The majority of men like to view attractive women in states of undress, and if they are horror/exploitation fans, they also have a taste for gore and violence. Hence, sexualized violence towards women — like the naked torture victims in nunsploitation, naziploitation, and WIP (Women in Prison) films —  became an accepted, and even expected, feature in these films. I rather suspect, though, that the male audience that flocked to see Pam Grier play a sadistic lesbian prison warden in Women in Cages were more interested in the physical attributes of Grier and her onscreen cohorts than the plights of the prison inmates.

However, this “boys will be boys” explanation doesn’t let either the filmmakers, the producers, nor it’s audience off the hook that easily. One can’t help but draw a parallel between the social changes propelled forward by Second Wave Feminism of the late-1960’s and 1970’s and the corresponding cinematic “backlash” against women in exploitation films. The same could be argued for the equally controversial blaxploitation film for its reinforcing of negative racial stereotypes at a time in history when the civil rights movement had advanced equality for African-Americans. Do I think there was some organized conspiracy against gender equality amongst B-movie filmmakers? No, of course not. The Roger Cormans of the world cared about bums-in-seats in movie theatres, not sociopolitical agendas. One thing that exploitation cinema has certainly never promised to be is politically-correct or enlightened — in fact, the inverse is often true. However, there is an undeniably strong anti-feminist ethic to many of the aforementioned films, best characterized as a “who the hell does she think she is? Let’s teach her a lesson” response to the burgeoning political power of women in the 1970’s. 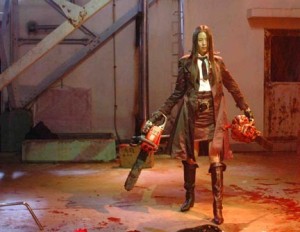 You might now be asking yourself the question: why does Lady Lazarus, a woman and professed feminist, enjoy watching exploitation films? Well, apart from enjoying the trashy, campy fun of it all, it is only in the speculative fiction of horror, science fiction & fantasy that women can truly stand in equal footing with men — and by “equal footing”, I mean in terms of physical strength and prowess. Female characters can be imbued with superhuman strength, have magical powers, be kick-ass ninjas or fight off the zombie hordes. For every repellently misogynistic film like Ilsa, She Wolf of the SS (1974), you have the blood-drenched, splatter-gore lunacy of Tokyo Gore Police (2008), a contemporary Japanese horror-exploitation film with a sword-wielding female protagonist. While this film is replete with very disturbing and sexually-charged body horror imagery — most notable being a headless ‘human chair‘ — I did not sense the same level of sadism targeted specifically at women as I did in the Ilsa film. Everyone in Tokyo Gore Police — men, women, chairs — gets the slice ‘n’ dice treatment.

2 thoughts on “Nostalgic for sleaze, part III: more grisly than ever in Blood Color!”